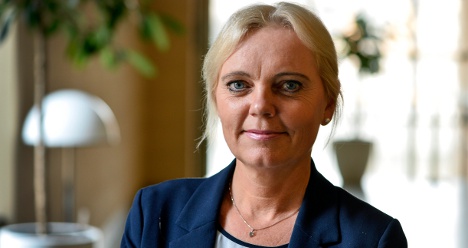 Kristina Winberg is an MEP for the Sweden Democrats. Photo: TT
The politicians from Sweden will be part of the Europe of Freedom and Democracy (EFD) group, along with 46 other MEPs from parties including Ukip and Italy's Five Star Movement.
The news was welcomed by Sweden Democrat leader Jimmie Åkesson.
"It's a huge pleasure that we've got past this group issue," he told the party's Samtiden newspaper.
"We're now members of an EU-critical group led by Nigel Farage, who must be considered to be Europe's leading figure when it comes to stopping EU federalism and power shifting from member states to Brussels. This will create good opportunities for our party group during the mandate period."
The news will come as a relief for the Swedish party, which had looked uncertain of finding a group to join ever since the elections in May. Teaming up with other parties in the European Parliament is considered crucial for exerting influence on EU policy.
Nigel Farage, the president of the EFD and whose party claimed the largest number of seats in the UK, had previously described working with the Sweden Democrats as "highly unlikely".
The Sweden Democrats had long seen the Danish People's Party and the True Finns as desirable partners, and had even applied to join European Conservatives and Reformists (ECR), led by the British Conservative Party, as well as the EFD. They had previously also refused to reject the idea of working with French National Front.
Farage welcomed Wednesday's news:
"We have struggled against much political opposition to form this group and I am sure it will operate very well.  Now it is formed I expect other delegations to join soon," he said in a statement.
Others in the group include members from Lithuania’s Order and Justice Party, the Free Citizen’s Party of the Czech Republic, the Latvian Farmers’ Union and an Independent MEP from France.