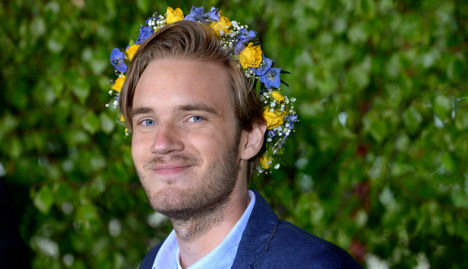 Pewdiepie, the most popular YouTuber in the world. Photo: Janerik Henriksson/TT
Imagine becoming a millionaire by just sitting at home with a camera and an extensive set of video games.
Well that's exactly what Swedish YouTuber Felix Kjellberg has done. Kjellberg, much better known to his almost 28 million subscribers as PewDiePie, earns $4 million a year and most of it pure profit, reported the Wall Street Journal.
The screechy Swede, who makes first-person videos playing video games, said in a rare interview with the paper that such an influence was scary.
"I'm so central to YouTube now, and that puts me in the spotlight and raises a lot of questions like 'Why is he so big?'" he told WSJ.
"I'd much rather prefer to have something like 5 million subscribers."
The Swede's videos have been viewed almost 5 billion times.
One of PewDiePie's more recent videos
One of his most popular, with almost 20 million views.