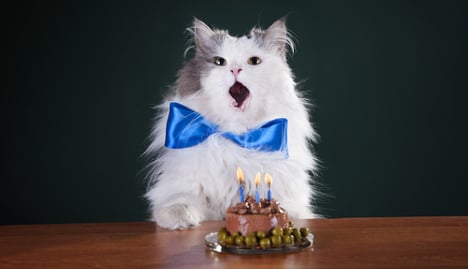 The cat in this picture is not the cat in the story. It might not even be his birthday. Photo: Shutterstock
Egypt may boast the Great Sphinx of Giza, but Sweden can now lay claim to Prince Columbus, a 25-year-old housecat.
"He sleeps a little more these days, but otherwise he's just the same," owner Astrid Bengtsson Gustavsson told the local Värmlands Folkblad newspaper (VF).
The cat, which lives with its owners in central Sweden, is in good health and set to turn 26 in November. That's the equivalent of 121 in human years.
The Guinness Book of World Record says the oldest living cat in the world is 24-year-old Poppy, but ever since poor Poppy passed, Gustavsson has questioned whether her pet could take the title.
Click here to see pics of Prince Columbus, via the VF newspaper
She says she is certain of the cat's age by a diary entry she penned on November 11th, 1988.
Prince Columbus weighs eight kilogrammes and has only been to the vet once to be castrated – over 20 years ago.
Meanwhile in the UK, owners of a cat called Snowy claim to have the world's oldest living cat too. Snowy is 27, although the family has only owned it for 13 years and the claims have yet to be proven.