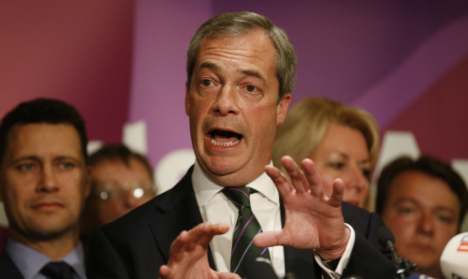 Ukip leader Nigel Farage. Photo: TT
"For SD it is another step in the process of institutionalizing themselves and becoming a member of an established EU-critical group," Ann-Cathrine Jungar, political scientist at Stockholm's Södertörn University, told The Local.
"From their point of view, it's a further step in that process, and also in gaining credibility and being accepted. When you're a member of a group there is more likelihood of having a voice and having influence."
Nigel Farage, the president of the EFD and whose party claimed the largest number of seats in the UK, had previously described working with the Sweden Democrats as "highly unlikely".
Jungar, who specializes in radical right parties in Europe, explained that the apparent u-turn was made possible in part by overtures from the Sweden Democrats and in part out of the necessity of EU politics.
"Farage was in a situation where he needed new members. There were enough seats but he needed representatives from seven member nations. The threshold was lower." she said.
"Farage had originally criticized the Sweden Democrats for being 'too extreme', but I believe it was more aimed towards the youth group which had united with the National Front."
The Sweden Democrats youth wing, which has regularly been at odds with the mother party in recent years, announced two weeks ago that it had left the group which brought together far-right parties from across Europe, including the French National Front.
Jungar explained the decision as a deliberate ploy by the Sweden Democrats to remove the basis for Farage's criticism. She pointed out that the Sweden Democrats have also undergone a long process of ideological and organizational transformation.
"Jimmie Åkesson formulated the zero-tolerance approach a few years ago. Since then, they've been efficient in excluding party members who are too extreme. Their aim is to remove the pariah status they currently have. It's a long-term strategy that requires both pragmatism and compromise – and it's likely that this will continue to cause internal tension," she said.
"They've also got more public funding, meaning they have more money for communications and election campaigning."
Farage was forced on the defensive after the announcement to admit the Sweden Democrats, rejecting accusations of breaking his word by pointing out that the two Sweden Democrat MEPs, Kristina Winberg and Peter Lundgren, had written him a letter distancing themselves from their party's past, according to a report in the UK Guardian.
"They are a party that has changed dramatically over time. They have acknowledged their mistakes. We have met the two MEPs, they seem two very decent working-class people…They are Swedish patriots who want the best for their country," an EFD source told the newspaper.
While the Sweden Democrats welcomed the news that they had been accepted into the EFD group, it also signalled a recognition that they have been thwarted in their ambitions to form a European partnership with the Danish People's Party and the True Finns.
The party had long seen their Nordic neighbours as desirable partners, and had even applied to join the European Conservatives and Reformists (ECR), led by the British Conservative Party. The Danish People's Party and the True Finns have meanwhile since been admitted into the ECR group.
Ann-Cathrine Jungar explained however that the Sweden Democrats' goals remain under development and that as with all political movements their ultimate aim is to manoeuvre themselves into a position where they can actually have an impact on power.
"Their ultimate goal in Sweden, of course, is to become a legitimate party that others will cooperate with so that they can have direct influence, rather than the indirect influence they have today," she said.
The Ukip-led group now has 48 MEPs from seven EU states. Ukip, with 24 MEPs, is the largest party followed by Italian ex-comic Beppe Grillo's Five Star Movement with 17 MEPs.