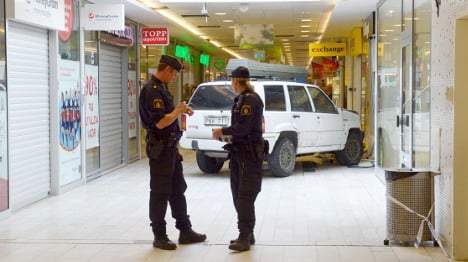 Photo: Bertil Ericson/TT
Police are on the hunt for four men whose car ploughed into a jewellery store in Botkyrka on Monday.
The men left on foot after failing to break the glass and get inside.
IN PICTURES: See more from the botched robbery
"They ran away from the scene and jumped into a black car that was waiting for them," Sven-Erik Olsson of the Stockholm police told the TT news agency.
Police suspect the offenders have already changed car.
The men were armed with crowbars, police added, but were otherwise unarmed.