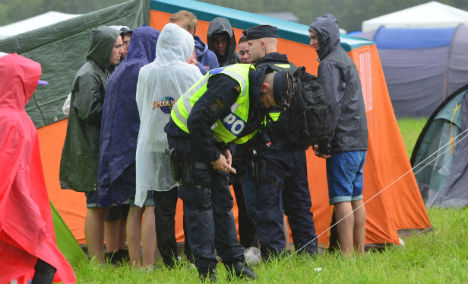 Police inspect the scene at a campsite at the Bråvalla festival after five people were hospitalized following a lightning strike. Niklas Luks/TT

At least five people have been injured after lightning struck the Bråvalla festival camping grounds in Norrköping in eastern Sweden, south of Stockholm.

A 20-year-old with life-threatening injuries has been taken to hospital, along with two other injured festival-goers.

"According to a security guard his heart won't start," a witness told newspaper Aftonbladet.

"It hit three people, two guys and a girl," festival-goer Jonathan Karlsson told the paper. "They were knocked out completely. I heard that they got two of them conscious. When the girl came to she started throwing up blood."

"Party tents started flying everywhere. We felt the electricity in our hands standing 300 metres away," Aftonbladet's reporter on the scene said. All performances were put on hold for two hours.

Sweden's weather agency SMHI said the rain is likely to continue for several hours. However, by 4pm most of the storm had passed and the festival continued.