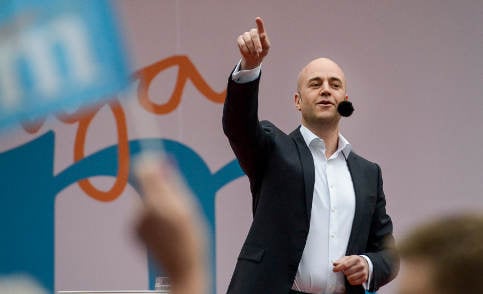 Current prime minister and Moderate party leader Reinfeldt trotted onto the stage at Almedalen to the sounds of cheers and applause. Totally at ease in the moment, he paced the stage as he waited for the noise to die down.

And then he launched right into the speech which experts are calling Almedalen’s best – and also Reinfeldt’s last at the event.

"It felt like a farewell speech," political scientist Ulf Bjereld told The Local.

"There was an interaction between Reinfeldt and the audience which worked very well. He had a very positive introduction, about values, ideology, and belief in the future. He should have sounded like this more often."

Indeed, Reinfeldt’s speech made headlines for much more than the topless protesters who momentarily interrupted him.

He began by welcoming – and thanking – those in the audience.

And finally, to mixed delight, awe, and stoicism in the audience:

"Is there anyone here tonight who was born in another country? Thank you for choosing Sweden."

Reinfeldt's speech continued in the same folksy, casual manner it began, with the prime minister frequently joking and mocking himself. It worked like a charm on the audience members, who laughed and cheered in all the right places.

"Unlike many other party leaders, he thrives on the stage," KG Bergström, journalist and former politician with the Moderate party, said of the speech. "And he's totally free from a script."

Bjereld agreed, saying that the style of Reinfeldt's speech was reminiscent of American politicians.

Reinfeldt talked about the economy as the party’s number one priority, but also reiterated that the Moderates’ project is mankind.

"Human beings are the take-off point and goal for what we want to see in society," he declared.

"Mankind, with its never-ending ability to develop thanks to its own strength. We are born into this world literally screaming with vitality, and the sensation that there is so much out there to look forward to. We have to give people room to create their own futures."

Bjereld called it the best speech of Reinfeldt's career – and added that is was much more optimistic than usual.

"He doesn’t usually talk so much about people and values," Bjereld told The Local.

"Everyone thought he would focus on the economy, but it was a visionary speech. Very unusual for him."

Bergstöm said that Reinfeldt's rhetoric was remarkably strong, and that the party leader has finally realized that "voters want visions and values". But when it came down to the content, the Moderate Party's platform still remains relatively weak.

The Moderates' main suggestion is the building of 20,000 new student flats. The housing boost would soothe the housing shortage in Sweden's cities while also creating around 13,000 jobs, Reinfeldt said. But many political experts remain unimpressed.

"While it may have been Fredrik Reinfeldt's best party leader speech in Almedalen, it was also probably his last," Bjereld mused.

"The Swedish people like Reinfeldt as a person. But they vote for parties, not people. And the Alliance has emptied its bank of possibilities for turning around public opinion."

He added that public discourse in Sweden is no longer focused on Reinfeldt, but rather on what problems Löfven will face "when" he is elected.

Despite common belief that Social Democrat leader Stefan Löfven will take over after the elections, a poll last week revealed that the Prime Minister had three percent more support than his rival, at 49 percent. But poll results vary widely, with a poll from the week before claiming Löfven had 46 percent of support versus 34 percent for Reinfeldt.