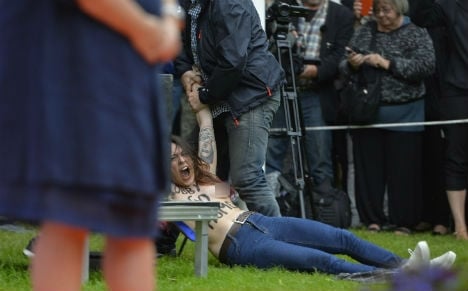 Photo: Henrik Mongtomery/TT
The women, two from France and one from Spain, were each fined 2,500 kronor ($365) after having been charged with disorderly conduct. It is customary for foreign nationals to fined instead of facing court when committing less serious crimes in Sweden
The women, part of a four woman unit from the group whose modus operandi is to strip half naked and daub their chests with various messages of protest.
Reinfeldt was targeted during his speech on Thursday evening in Almedalen to bring attention to a proposed limestone mining in Ojnareskogen in northern Gotland.
A fourth woman, Swede Jenny Wenhammer and who was not fined as she had kept her shirt on, explained the group's goals.
"The aim was to direct us to the person with the most power in Sweden and Almedalen that could have an influence on the mining boom going on now," she told Aftonbladet.
After chanting "lobbyists go home" and "no mining boom" the four women were taken away by police.

"You cannot be arrested for trying to commit the offence. As I am a woman it is illegal to show breasts but by chance I was unable to. I am not satisfied with my contribution.