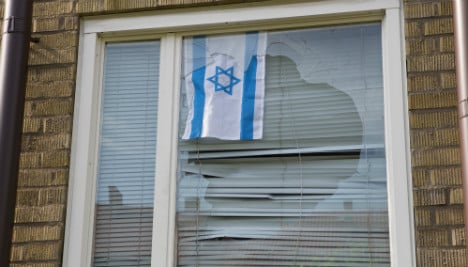 The aftermath of the attack in Seved, Malmö on July 6th 2014. Drago Prvulovic / TT

The incident occurred in Seved, Malmö, shortly before midnight on Sunday when the man displayed an Israeli flag from his window, sources told newspaper Sydsvenskan. The man reportedly exchanged words with men on the street after hanging the flag, and left his apartment.

Before the assault the man's window had been smashed where the flag of Israel had been hung.

"After that the man went out onto the street to see what was going on. Then he was attacked and it was on the basis of the flag. That is the information we have at present," Linda Pleym of the Malmö police told the TT news agency.

Police said he was then assaulted by around ten people with iron pipes and chased from the building. The man managed to escape his attackers and was found by police on a nearby street. He was taken to hospital with serious injuries.

Police have not yet made any arrests, but have interviewed witnesses in the area.

"Our initial evaluation is that this is a hate crime," Malmö policewoman Marie Keismar told TT news agency. The act has been classified as aggravated assault.

The police intend to interview the victim on Monday afternoon.