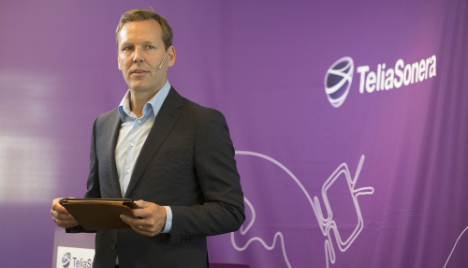 Telia Sonera CEO Johan Dennelind. Photo: TT
"We actually don't know what the situation is. It's not good that we don't know who is behind our affiliated company in Azerbaijan," Telia Sonera CEO Johan Dennelind told told the TT news agency.
"Now we're doing everything we can do find the answer to that question, and are very focused on it."
Dennelind adds that before they are certain of the circumstances they can not make any further comments.
"It's a basic rule that when we enter a country we need to know who's behind our subsidiaries."
The new allegations emerged in a fresh report by the Organized Crime and Corruption Reporting Project (OCCRP) – a group which investigates corruption in eastern Europe.
The story dates back seven years to when Telia Sonera bought out the Azerbajdzjan state's shares in its subsidiary in the country. According to the OCCRP report the company however maintains close links to the Aliyev family through an unidentified Swiss art dealer.
Chief prosecutor Gunnar Stetler, who heads an investigation into allegations of bribery and money-laundering involving the firm in Uzbekistan, has refused to comment but has confirmed the prosecution office is "keeping an eye on" the situation in Eurasia.
The news emerged as Telia Sonera present a 500 million kronor ($73 million) drop in pre-tax profit for the second quarter 2014.
Dennelind explained the drop due to a decline in revenues in its Spain operations. The company's share fell by 2 percent on the Stockholm bourse on Thursday.