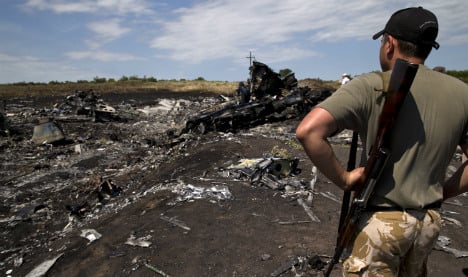 "A commander was very aggressive. Afterwards our interpreter told us that he had said that his entire family had been killed by the Ukrainian army in Slovjansk and that he now wanted to kill her and her entire family," said Dagens Nyheter's (DN) Paul Hansen after his release.

According to DN, Hansen was detained together with his colleague Jan Lewenhagen at around 10am local time on Sunday while they were in the morgue in Donetsk in eastern Ukraine.

The pair were taken to the SBU secret service building in the city where they were put in a room under guard. A further seven journalists joined them in the room, according to the DN report.

The Swedish journalists were able to send a text message to their editorial office and three hours later they were released.

They were never informed as to the reason for their detention.

The tension has risen in international relations to Cold War levels over the weekend. Reports are widespread in the international media of OSCE observers being prevented from doing their jobs at the crash site. There are also unconfirmed rumours of looting and bodies left to rot by the road side.

Western European powers have called on Russian President Vladimir Putin to use his influence on the rebels to ensure that international observers are given full and free access to the site, enabling the collection of bodies and to ascertain the cause of the crash.

According to a report in the Financial Times (FT) on Sunday the leaders of Germany, Britain and France have agreed that the EU should ready itself to impose additional sanctions on Russia if Putin does not comply.

There are also reports of a UN Security Council resolution being prepared for Monday to ensure the Kiev-led crash enquiry can proceed without delay. Evidence is mounting which suggests that the plane was downed by a missile fired from separatist held territory.

Swedish Foreign Minister Carl Bildt has previously described the atrocity as a "first class international gangster crime" and in an article in the FT, Bildt argued that "Putin's credibility lies amid the wreckage of flight MH17".

"Let us be clear on one thing: the crisis over Ukraine, which has been escalating since late last summer, has been initiated and driven by Russia at each and every step," Bildt said.

"And whatever details emerge over the downing of the Malaysian airliner on Thursday, it is here that the ultimate responsibility lies."

Bildt warned that Vladimir Putin was fighting a propaganda war after consolidating much of the Russian media in state hands last autumn.

"While in the past a war was initiated by an artillery barrage, today it is by a disinformation campaign."

The shooting down of a civilian airliner has moved this civil conflict into another political level and Bildt warned that if Ukraine's sovereignty is not assured then "the stability of large parts of Europe is at stake.