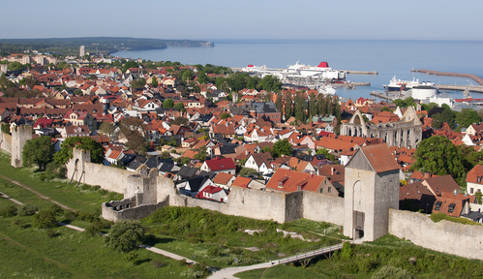 The town of Visby on Gotland. Photo: Shutterstock
The flight passed over Gotland, an island off the east coast of Sweden, on July 18th in the late afternoon.
A classified document from the Swedish Defence Force, which was leaked on Wednesday, revealed that the mystery flight passed over Swedish airspace from the east.
The plane, a Boeing RC-135, was denied permission to pass over Swedish airspace, but the pilots chose to disregard the refusal.
The plane crossed Gotland, passing over the town of Visby, and then moved south alongside the island of Öland.
On Thursday a source to the Svenska Dagbladet (SvD) newspaper revealed that the plane was an American reconnaissance aircraft.
The paper reported that the plane was being chased across the Baltic Sea by a Russian aircraft that had flown up from the Russian enclave of Kaliningrad.
The Defence Force had also kept a close eye on the plane for 90 minutes while it flew over 200 kilometres above the Baltic Sea, according to the source.
Neither the foreign ministry nor the Swedish Defence Force have confirmed or denied the report.