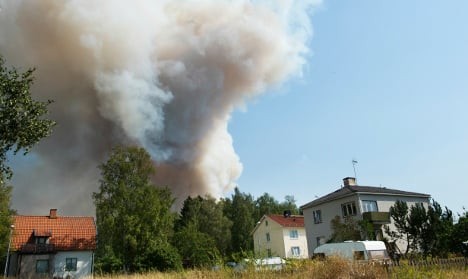 "The fire risks heading north to the lower reaches of Norberg," Fredrik Eriksson of the emergency services told the TT news agency on Tuesday, adding that the blaze is still far from being under control.

In fact, the fire broke through safety borders set up by emergency workers on Monday.

The blaze, which has already claimed the life of one, prompted condolences from Sweden's King on Tuesday.

"This is one of the largest forest fires in Sweden in modern times," King Carl Gustaf said in a statement on Tuesday.
"I feel deeply concerned for the people who have been asked to leave their homes. I also understand that it is a very tough situation for all those struggling to fight the fire."
See more pictures of the fire

Newspaper Expressen reported on Tuesday that it had begun raining slightly in Norberg, giving fire fighters hope that the precipitation will slow the flames.

The fire has already prompted visits from Sweden's Defence Minister Karin Enström and Rural Affairs Minister Eskil Erlandsson. Opposition leader Stefan Löfven also headed up on Tuesday, telling the Aftonbladet newspaper that he couldn't continue his campaigning "as if nothing was happening".

Just before 10.30am on Tuesday, the town of Norberg was announced as officially on alert for evacuation as the flames approached. The fire is now so large that the smoke has shown up on Nasa images taken from space.

The Västmanland county council wrote on its Facebook page that while there was no official decision to evacuate the town, but that residents should pack bags and prepare their escape route should the decision be made.

The burning area is estimated to be 15,000 hectares – or the size of 21,000 football fields, reported the Expressen newspaper.

Shortly after midnight, police discovered the body of a 30-year-old man on a road north of Stabäck, Västmanland, one area affected by the massive fire.

Police said they did not know precisely what had happened to the man or when, but that it was clear he had died from his burns.

The body was impossible to identify due to extreme burns, but police found an ID card on the body and believe they know who the man was.

By 8pm on Monday around 1,000 people had already been evacuated, mostly from isolated homes and small hamlets.

Stefan Lundin, who lives in the middle of Norberg, described the scene on Monday evening:

"I've never been in a war zone, but that was what it made me think of," he told The Local on Tuesday morning. He had sent his 92-year-old grandmother to relatives in Västerås as a precaution, he said.

"There was black smoke over Norberg. You couldn't sleep with the window open."

Despite Norberg being surrounded by forests, major forest fires are rare in the area.

"I've never experienced anything like this. Evacuation – that's what happens in wartime," Stefan Lundin said. He said the centre of the town had been full of city buses, preparing for the possible evacuation. He had seen fire engines from as far away as Hudiksvall and Sundsvall, over three hours drive away.

Residents were "frightened but calm," he said. "People are looking after each other."

While residents are hoping for rain, Sweden's weather agency SMHI predicted another warm day with no chance of rainfall.

Hard winds had been hampering efforts to control the blaze. The fire was described as “out of control” by firefighters.
“We have the worst possible conditions,” said Fredrik Eriksson, spokesman for the fire brigade, on Monday.
The area around Norberg and Sala is heavily forested and sparsely populated. The quaint town of Norberg, with its many 17th century buildings, is popular with tourists and day trippers.

Firefighters believe the fire will burn for weeks or even months.

On Monday afternoon, a rescue team saved nine volunteers who were encircled by the flames, shortly before the nearby village of Gammelby was evacuated.

There were originally about 100 volunteers assisting to control the fire, but emergency services declared on Monday they would no longer accept help from the public due to the risk. They added that they're unsure how the fire began.

Emergency services from Västmanland, Uppland, Stockholm, and even Gotland are cooperating with the Swedish military to stop the fire from spreading even further.

In Pictures: Forest fire rages out of control in Sala Italian and French reinforcement has been called in after Sweden appealed to the European Commission for help.

"I express my sincere gratitude to the Italian authorities for providing swift support to Sweden in this moment of need. Let us hope that our biggest fear of the blaze spreading to urban areas will not materialise," said Kristalina Georgieva, the responsible European Union Commissioner.

"Forest fires are a risk we tend to associate primarily with southern Europe, but we are seeing that no country is immune," she added.

The hot and stormy summer weather is only compounding the problem.