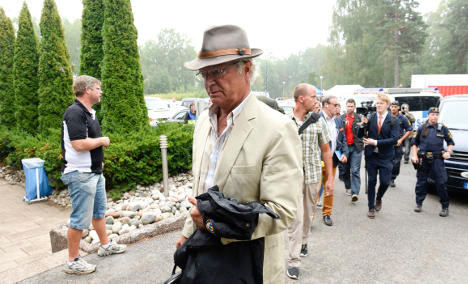 The king arrived in Ramnäs, near the scene of the fire, on Wednesday afternoon.

"I feel for all those affected," he told reporters on the scene. "This is a tragedy."

"I'm always trying to keep up to date on what's happening in this country, and when I realized it was more than just an ordinary fire I decided to come up here."

On Tuesday, he acknowledged that the fire was one of the largest in modern times.

Extinguishing efforts have been aided by low levels of wind and a touch of rain, but the French water bombers took until 5pm to prove useful.

Extensive smoke had proved too difficult to navigate for the French team and their fleet of planes, with officials explaining that when visibility is poor the plans are unable to fight the fire properly. But by late afternoon, they took to the skies for the first time.

The planes are able to carry much more water than the helicopters Sweden has been using and can scoop up 6,000 litres of water in just seconds. Two similar planes from Italy have also touched down, but are yet to fight the flames.

Meanwhile, the county council of Västmland announced on Wednesday that the forest fire, Sweden's largest of modern times, "may be approaching a level they can control".

Many of those who have been told to leave their homes have been informed that they can return, provided they are ready to leave again at a moment's notice.

See more pictures of the fire