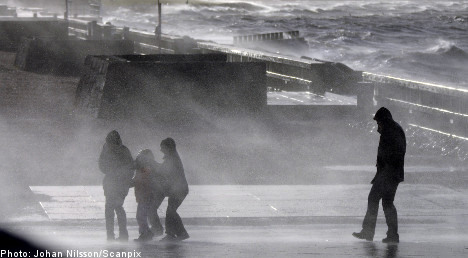 A thunderous front is predicted to hit Götaland on Monday and head north, meteorologists at Sweden's weather agency SMHI said on Monday.
SMHI issued a class 1 warning, meaning there is a risk of damage to societal functions.
The east side of Svealand can expect buckets of rain, with Stockholm and Uppsala in particular warned that "abundant rain" and strong winds were on the way.
The storm marks the remnants of Hurricane Bertha, which tore across the Caribbean before being downgraded to a post tropical cyclone. It then wrought havoc on the southern reaches of the UK over the weekend.
Later on Monday, the rains are expected to move on to northern Sweden.
The entire week is predicted to be a wet one, in fact, with cooler temperatures and clouds expected to hang around.
Wondering what the weather looks like in your corner of Sweden? Check out The Local's weather page here.