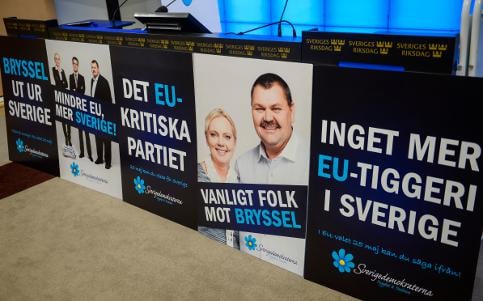 Sweden Democrat ads from the EU elections. Photo: Per Larsson/TT

"It's scandalous that a publicly-owned company makes itself a political actor in an election campaign in this way," Sweden Democrat spokesman Martin Kinnunen said in a statement.

The advertisements were planned to cover the back of busses in Malmö, Lund, and Helsingborg in southern Sweden. But upon seeing the ads, transport operator Skånetrafiken has put its foot down.

"We have judged that the advertisements can be interpreted as racist and unethical, and incongruous with the values of society," Camilla Bunke, director of sales at Skånetrafiken, told newspaper Sydsvenskan.

The three posters shunned by the agency read "Stop the organized begging," "Less immigration here, more help for refugees there", and "Vigorous efforts against crime, more support to crime victims".

Bunke said that the company is obliged to stick to its contract which states "we only run advertisements with generally accepted messages", and that the issue is the content, not the sender.

"We have looked at the content of the messages and we have not found anything to motivate stopping the ads," SL spokesman Jesper Petterson said.

"It's elections and the Sweden Democrats are a parliamentary party with the right to get across their message."