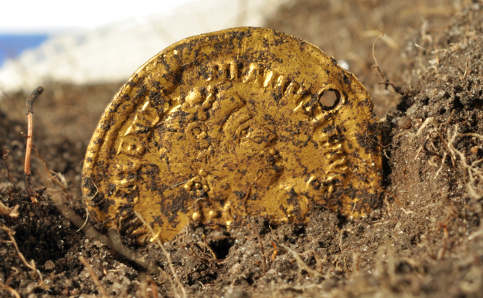 Archaeologists found the coin on Monday at a site on the island of Öland that's been compared to Italy's Pompeii.

A small team of archaeologists at Kalmar County museum, in collaboration with Lund University, has been digging at the site for the past three years. The team is studying the Migration Period in Scandinavian history, from about 400 to 550 AD, centuries before the Viking Age.

While the team has found several hundred of the coin already, Monday's discovery was a big one, said archaeologist and project manager Helena Victor.

"This is the first one found in an archaeological context," she told The Local. "Normally we find them while we're plowing the field. But we found this one inside a house where we found people who'd been killed."

The object, a small golden coin also known as a solidus, is from the Roman Empire and may be an important puzzle piece in mapping the island's history.

"We think it may have been the reason for the massacre at the Sandby Borg fort. And this is the only coin that wasn't taken," she explained.
"We found it on the edge of a posthole in the house. So maybe the robbers came to take the treasure there, and maybe they ripped the bag and one coin fell down into the posthole in the floor, and there it remained."
IN PICTURES: See the ancient crime scene

The site in Sandby forg. Photo: Kalmar County Museum
While Victor refused to put a price value on the coin, she said it was maybe equivalent to a new Volvo car. The soldiers in the Roman Empire, she explained, earned approximately five of the coins per year, and likely worked for a few years and then brought their riches home.
"I think that the money was a good excuse to end a feud. So there was probably a feud, this was a very strong statement, not just a normal robbery-  an excruciatingly evil statement to kill these people and just leave them," Victor explained.
"It was truly shameful. So to make a real statement you forbid them to burn the bodies. There are still memories 1,500 years later of these events, it's a dangerous place. Parents tell their children that they can't play there because it's a dangerous place. They don't remember the history but they remember it's dangerous."
The coin will go on display at the Kalmar museum this autumn together with other finds from the area.
The find is the latest in a long line of archaeological discoveries in Sweden. Within the last year, a secret hoard of gold figures and Viking coins from the Iron Age was uncovered in southern Sweden, a 16th-century kitchen was dug up in central Stockholm, and Swedish divers unearthed Stone Age 'Atlantis' relics in the Baltic Sea.
Solveig Rundquist/Oliver Gee