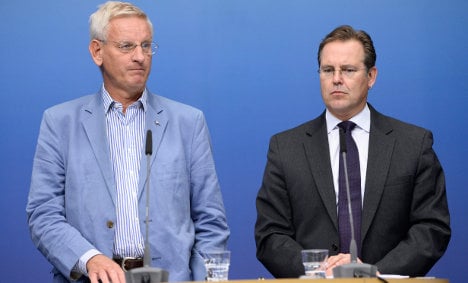 Photo: Maja Suslin/TT
"Things are changing and we're heading towards a much less secure world," Bildt told reporters at Stockholm's government offices on Wednesday.
"We have a lot more of Sweden in the world today, and a lot more of the world in Sweden."
He pointed to trouble in Ukraine, Iraq, Syria, and Gaza, adding that the Islamic State (IS) was a bigger threat than al-Qaeda ten years ago.
The flood of refugees heading to Europe, he added, was larger than ever before.
"There are more people fleeing today than there were during the Second World War," Bildt explained. "And of course, that affects us."
Indeed, Sweden's refugee intake has been a hot topic in domestic news recently.
There have been reports of record-breaking numbers of refugees this year, and the prime minister has said that Swedes must "show tolerance and open their hearts" for asylum seekers. Last year, Sweden took in almost 20 percent of the EU's asylum seekers, more than any other country in the union.
Bildt defended on Wednesday Sweden's refugee intake, telling reporters that the refugees from the Yugoslav War in the nineties worked out well for Sweden in the long run.
Finance Minister Anders Borg also took the chance to address Sweden's refugee intake and the "challenge of dealing with the costs responsibly".
The finance minister said the cost would increase by 500 million kronor this year ($72 million), 1.7 billion in 2015, around 6 billion in 2016 and roughly 12 billion kronor over the following two years, reported the Dagens Nyheter newspaper.
Borg also promised that despite the increased costs, there wouldn't be any tax hikes or spending cuts in 2014 or 2015.