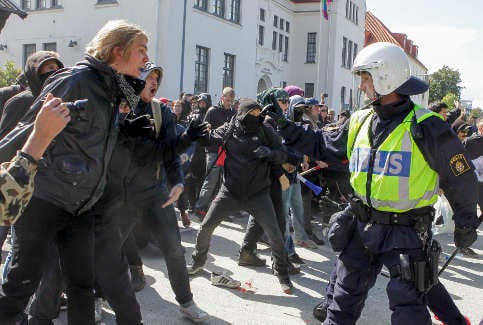 Police at the demonstration on Saturday. Photo: Drago Prvulovic/TT

Police in Malmö, southern Sweden have landed in hot water for their response to anti-Nazi protests on Saturday where a man was hit by a police van and others were trampled by police on horseback.

Now the police are also under fire for misreporting the incident.

"The police cavalry has again returned to disperse the violators who are throwing paving stones and ammonia at police," the police force wrote in their report of the incident.

The scene before it turned violent. Photo: Drago Prvulovic/TT

But the paramedics in question have come forward and denied the claims.

"I cannot explain the police's reporting, but we can confirm that no ambulance personnel have been attacked and there is no damage to the vehicles," chief paramedic Hans Ivarsson told local paper Skånska Dagbladet. "There have been no attacks."

Despite a plethora of images and video clips from the demonstration, proof that protesters threw stones at police is also lacking.

The policewoman who wrote the erroneous statement refused to tell the paper where she had heard that paving stones were thrown – saying simply that she had.

On Monday the officer responsible for the police team apologized for the statement that paramedics had been attacked, which he confirmed as false.

"An unfortunate mistake which we will correct," Eriksson stated.

He added that it may also be incorrect that paving stones were thrown at police – but maintained that stones of some kind, as well as bottles of ammonia, were indeed thrown.

Pictures of the protest, including police horses appearing to trample over protesters, have sparked a public outcry on social media. On Saturday police claimed that, although the pictures looked bad, they had been forced to take action as the violence escalated.

But the police force did an about-face on Monday, as Eriksson confirmed that they had reported themselves so a prosecutor could investigate the incident.

A total of ten people were injured at the protest, which was sparked by a speech by the neo-Nazi Party of the Swedes (Svenskarnas parti).