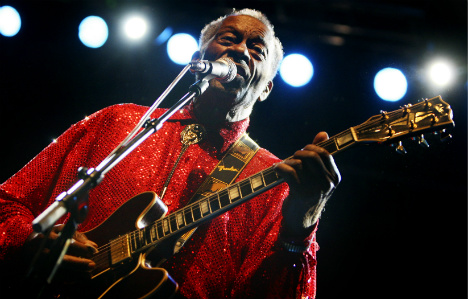 Chuck Berry performing in Oslo in 2007. Hakon Mosvold Larsen /Scanpix Norway
The prize, which was created in 1989 by the manager of Swedish band Abba, is awarded annually to one contemporary musician and one classical musician.
The 2014 prize was shared between Berry and US theatre and opera director Peter Sellars.
Berry, 87, was too sick to attend the ceremony in Stockholm's Concert Hall on Tuesday, and the honour was accepted by British rocker Dave Edmunds, who read a speech on Berry's behalf.
"My heart is in Sweden. I want to thank the king and the royal family for awarding me the Polar Prize. I understand what a great honour it is to be a recipient, and I'm sorry that I'm unable to travel and receive this personally," he said.
Peter Sellars was also honoured for showing that "classical music is not about dusty sheet music and metronomic precision", officials noted.
In accepting his prize from the king, he thanked the royal family.
"Living with music every day is already the most astonishing gift anyone could ask for."
Berry and Sellars join a long list of prestigious winners of the prize including Sir Paul McCartney, Joni Mitchell, Paul Simon, Miriam Makeba and last year's winner Youssou N'Dour.