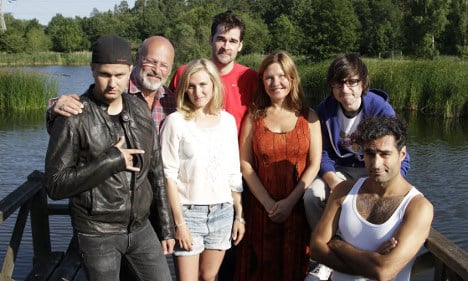 The cast of The Cold Swedish Winter.
Self-confessed Swedophile Danny Robins is taking on life in Sweden on a new semi-autobiographical radio programme on BBC4 called The Cold Swedish Winter, and he's well aware that he's not the only foreigner to do it.
Indeed, hit TV show Welcome to Sweden has also tackled the "stranger in a strange Sweden" phenomenon, though Robins explains that the two shows are "stylistically quite different" and that his was in production a long time ago anyway.
"And anyway, Armegeddon and Deep Impact were both released at the same time and they both did well, didn't they," he adds with a chuckle.
While life in Sweden may not be apocalyptic (at least not all the time), Robins' show shows a side of Sweden that he thinks resonates more with the target audience – expats in Sweden and the British public in the UK who tune in each Monday.
With all this in mind, we sat down for a chat with the comedian to learn more.
The Local: So you say you're a Swedophile – what does that even mean?
Danny Robins: I'm a Swedophile because I've been indoctrinated into Swedishness by my wife to the point that I almost believe that everything is actually better in Sweden. But in all honesty, I'm fascinated by Sweden, partly because society there seems in many ways very recognizable and familiar to the British yet with something underlying that is mysterious and intangible.
The Brits are fascinated too, and Sweden seems to be a society like ours but which just works better. I mean, British politicians are often wondering why Sweden's schools are better, why their streets are cleaner. Sweden is like a more successful version of the UK and it feels like we'll never achieve it in such a cramped little country like the UK.
What's the best thing about working with radio?
So far, the reaction has been nicest thing. It's always hard to know when you're fascinated by something if other people are too. I guess I was nervous at first as to whether Brits would be interested to hear about a man moving to Sweden, but I've got so many emails from such a wide spectrum of people that it's been amazing. And working with the finest Swedish comedy talent known to human kind has been incredible too.
And it's been interesting because there's no real tradition of radio sitcom in Sweden, and these actors were all doing something new in a second language. But they instantly got it, and were even capable of some really moving moments. The other thing was the challenge of avoiding cliches and stereotypes. I didn't want to laugh at the Swedes, and one of the things I'm proudest of is when Swedes tell me I've revealed something about them that they hadn't considered before. Things they haven't thought of.
After a decade of dealing with Swedes, what do you still find to be the strangest?
I suppose strangest, at least to a British sensibility, is the respecting of authorities. In Britain we have a strong tradition of protest, we think all politicians are liars, and we think the royals are people who take lots of money and don't do anything. I'm struck by how the average Swede trusts the government. In Britain a lot of the comedy is poking fun at politicians, very satirically. Swedes are a lot less cynical. I had a Swedish friend who was once saying something critical of the king and he lowered his voice when he said it. I think the respect for authority runs a lot deeper than Swedes can even imagine.
What could the Brits learn from the Swedes
Brits could learn respect for each other and society. I remember coming home once from the clean streets of Sweden and into a hell hole of dog poo, graffiti, and drunk people vomiting on the streets. This could all be down to the fact that it was Camden in north London, mind you.
But really, there's not much respect. In Sweden, everyone recycles, their dogs don't poo outside other people's houses. And the interesting thing is that it's not because Swedes fear the punishment, or fear getting a fine, it's rather that they know there'd be a greater social cohesiveness if they respected one another. That's one of the things I like the most.
What about the other way around? What could the Swedes learn from the Brits?
Relax! Take a chill pill. Whenever Swedes come over they tell me that they wish they had proper pubs back in Sweden, that a beer didn't cost a kidney, and that there could be more of a pub culture in general. That's what the Swedes could learn from us!
And lastly, let's get offbeat. Would you rather fight 100 beaver-sized elks or one elk-sized beaver?
Hang on. Do we call them elks? I say moose, all the Swedes I know say moose. In fact, I insist on it.
You know, someone once told me a story about a moose killing someone. It sounded like a joke at first, but it got really serious and horrible. I'm all too aware how dangerous mooses are. So to answer your question, I'd rather fight a moose-sized beaver. Mano a mano, I think I could wrestle him down. Whereas if you think about those little horns, a hundred beaver-sized mooses could do some serious damage.
The Cold Swedish Winter is a four-part radio series, the fourth and final episode of which airs on Monday. Listen to the first three here.