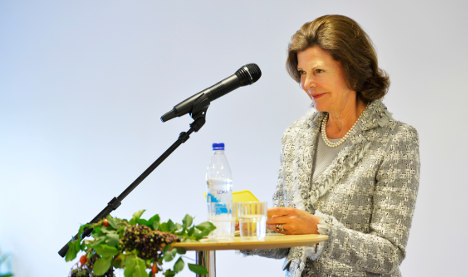 Queen Silvia. Photo: Henrik Montgomery/TT
Even though the 87-year-old musician was unable to travel to Stockholm for the Polar Music Prize because of health reasons, Queen Silvia told the tabloid Expressen that she and her daughter Madeleine had refused to attend the event.
She refused to attend because Berry in 1961 was sentenced to prison in America for the transportation of a 14-year-old girl across several US states while having sex with her.
He was convicted for human trafficking according to a 1910 law (the Mann Act), intended to protect against organised prostitution. Berry was given a three-year sentence.
Queen Silvia is the founder of a charity to help children called World Childhood Foundation, where Princess Madeleine also works.
"Unfortunately I received this information very late and when I heard this, I felt that it was not okay to be there, at the prize ceremony. So many people believe in me, in the charity Childhood and in the princess," Silvia told Expressen.
"It was a family decision and I hope that everybody can accept it."
Chuck Berry's conviction and the Mann Act are still controversial in the US. The musician argued that he believed the girl when she told him she was not underage.
He had previously served a three-year armed sentence for armed robbery, beginning in 1944.
The Polar Music Prize is an annual award given for significant achievement in the world of music. Usually two awards are handed out, one in the field of contemporary music and the other to a classical musician.
Winners — known as laureates — also receive a cash award of one million Swedish krona, ($145,000) as part of the prize.
Former winners of the prize include Paul McCartney, Ravi Shankar, Led Zeppelin, Mstislav Rostropovich and Bruce Springsteen.
St Louis-born Berry is seen as a pioneer of rock and roll and has been performing since the early 1950s. His most famous hits include "Roll Over Beethoven" and "Johnny B. Goode".
The ceremony went ahead on Tuesday and this year's other recipient was another American, the US theatre director Peter Sellars, most noted for his work on classical and contemporary operas.
Sellars received his award from King Carl XVI of Sweden.