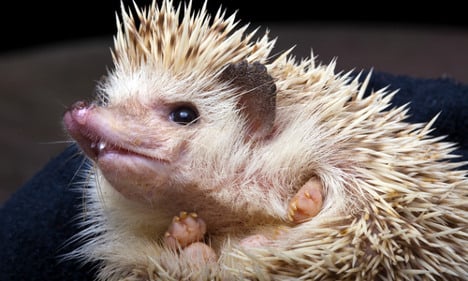 The small brown and white spiky creatures are not illegal in Sweden but there are concerns that owners may not know how to look after them.

"Pets like these need special environments, special food and specialist vets,” said Michael Diemer, spokesperson on pets and endangered species for the department.

“We have noticed more people getting in touch with us over the past few years and now we are getting calls every week from people who are unsure how to care of these animals,” he added.

It is not clear exactly how many African pygmy hedgehogs are in Sweden but according to newspaper Dagens Nyheter (DN) about 170 of the animals are insured in Sweden by Agria pet insurance, double the number five years ago. The animals typically cost between two to three thousand kronor ($285-$430). With a diet of dried cat food and canned insects, they can grow up to 23 centimetres in length and adults typically weigh between 270 and 500 grammes.

Breeder Heidi Permonen argues that the creatures are easier to look after than many other household pets.

“I think that people are interested in African pygmy hedgehogs because they are not as demanding as cats and dogs, for example,” she told DN.

“You can cuddle them and they are very cute,” she added.

Sweden's Department for Animal Welfare and Health says it has also been helping people who are struggling to cope with illegal pets including monkeys and squirrels captured from the wild.