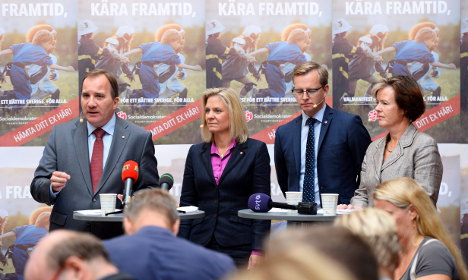 Social Democrat leader Stefan Löfven started his speech in Liljeholmen by describing Sweden as a "fantastic country" with "so much to be proud of".

But he argued that "Sweden needs a change, and making change isn't standing still and being passive".

His party's manifesto is entitled Dear Future and details policies expected to cost 40 billion kronor ($5.7 billion), compared with 15 billion promised by the Alliance parties on Monday.

Here are the key points:

Sweden's elections – how do they work? Earlier on Tuesday, an opinion piece by Stefan Löfven was published in Sweden's Aftonbladet newspaper. In it he criticised the current ruling Alliance, highlighting falling school results, rising unemployment and the privatization of welfare provision.

Writing in Expressen, leading Social Democrat politicians Margot Wallström and Mikael Damberg said they wanted to collaborate across block boundaries in order to introduce a third paid paternity month for fathers.
The policy is also supported by the Liberal Party which is currently part of the governing Alliance, which so far hasn’t backed the idea, following strong criticism from the Christan Democrats.
"In more and more areas, it is becoming clear how stupid today's bloc policy is for Sweden," argue Wallström and Damberg.