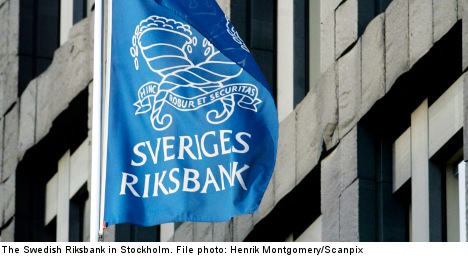 The Riksbank wants to keep inflation rates low as it works to towards an inflation target of 2 percent, it explained in a statement.
It suggested that the rate was unlikely to rise again until late next year.
"As in the previous forecast, it is assessed to be appropriate to begin raising the repo rate towards the end of 2015, when inflation is clearly higher," bank heads wrote.
Sweden is dealing with economic risks linked to high levels of household debt and the bank called on the government and other public bodies to introduce changes "needed for a better-functioning housing market".
Bank chiefs noted that while economic activity in the US and the UK was strong, international growth was weaker than expected in July due to unrest in Ukraine and weak prospects in the Eurozone.
They predicted that the low growth in the Euro area meant that Sweden's already weak export market could suffer.
But bank heads said they were confident that consumption and housing investment were expected to continue increasing at a good pace, and confirmed that the Swedish labour market had developed better than expected over the summer.

Unemployment in Sweden has also been on the decline, the Riksbank noted.