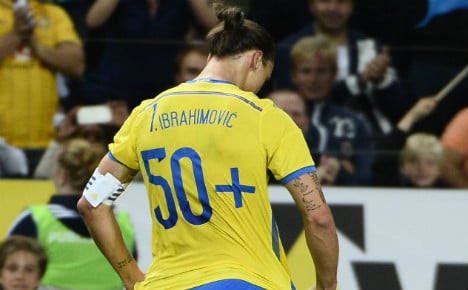 Ibrahimovic reveals his 50 plus shirt after scoring against Estonia. Photo: Claudio Bresciani / TT

The Paris Saint-Germain forward is currently on 99 caps but at 32 years of age is running out of time to match Anders Svensson's mark of 148.

"No, we won't be striking Anders Svensson from the record books," said the often temperamental Ibrahimovic, according to TT press agency on Friday.

The former Juventus, Inter Milan, Barcelona and AC Milan forward broke his country's scoring record on Thursday by notching a brace in a 2-0 win over Estonia in Solna, taking him to 50 international goals.

The previous record was set by Sven Rydell, who scored 49 goals in just 43 internationals between 1923 and 1932.

Ibrahimovic admitted that beating the scoring record had been one of his aims.

"When I passed Henrik Larsson (who scored 37 times for Sweden) it became fixed. I thought I was number one at that time, but I wasn't," he said. "Now it's nice to have the record."

Ibrahimovic, who has won titles in four different countries, also set a new club record mark for PSG last season with 41 goals in all competitions.

"It's what you look at after you retire. I've won 23 collective trophies and a couple of individual ones. That's why we play," he added.

He will reach his 100 caps for Sweden in Monday's Euro 2016 qualifier against Austria.