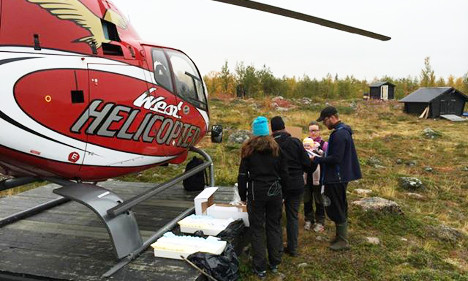 Photo: Westhelicopter AB/Facebook
The pilots have been making trips to the remotest places in far northern Sweden at the request of the Kiruna municipality.
With them, they take ballot slips, a small voting booth, and local government officials to oversee the whole process.
"There are villages up there without road access, where the Sami people live," pilot Jon Larsson told The Local.
"And what's more, we know they're busy with their deer herds and elk hunting. So we go to them." The pilots visited the villages of Vuosku and Kattuvuomaat, where seven of the 30 residents voted – a figure that Larsson said pleased officials.
"We were up there for the European elections too and only one person voted," he explained.
"People should always have the chance to vote," the company wrote on its Facebook page. "Even in places with no roads."
Do you live in Sweden but don't know how or where to vote? Learn more here.