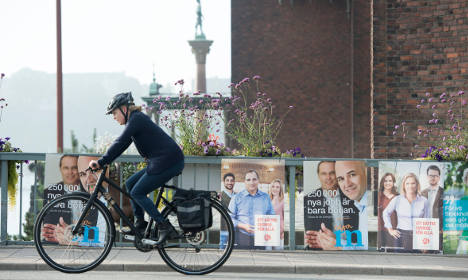 Photo: Jessica Gow/TT
Pollsters YouGov have promised the result of the 2014 election in Sweden at 4pm – even though the booths officially close at 8pm.
Li-Bennich Björkman, a Professor of Political Science at Uppsala University in eastern Sweden, said she wasn't aware of such a move in Swedish election history.
"This isn't pleasant to hear at all," she told The Local.
"It surprises me actually. Not only is it unethical but I think it will influence people's votes. This could let people get the notion that they can support the 'winning team'."
Sweden elections: who's who?

Sweden's party leaders. Photo: TT
She added that in countries like France, it's illegal to publish opinion polls so close to the election.
A spokesperson at competitor pollsters Ipsos was also unimpressed.
"This is unfortunate. There's a risk that a poll like this can have an effect on the actual election result," said David Ahlin, the director of public affairs.
"In my opinion, we should respect the election day and the voters should have the day to themselves to make their own decisions," he told The Local.
Five possible election outcomes Voting posters around Stockholm. Photo: Henrik Montgomery/TT
A spokesperson at Sweden's Election Authority (Valmyndigheten) brushed aside the news, adding that there was nothing official about YouGov's results.
"This has nothing to do with the election authority. We don't formally care about these things, we do our own reports and they'll be released later in the night," Carl-Johan Friman, press officer at authority, told The Local.
He added that the authority's preliminary results could be officially expected at around 10 or 11pm. These are not exit polls, rather results based on the counting of votes already cast.
Sunday afternoon's exit poll, which will be published by the Metro newspaper, will be carried out online from 4,500 respondents. The paper promises results that are accurate to within one percent, citing a previous attempt in a Danish election.
At 8pm exactly, when the polling closes, Sveriges Television will publish an official exit poll, as has been the tradition since 1991.
The Local's attempts to reach YouGov for comment went unanswered.
The Local will be blogging live throughout the night and you can follow us on Twitter @TheLocalSweden