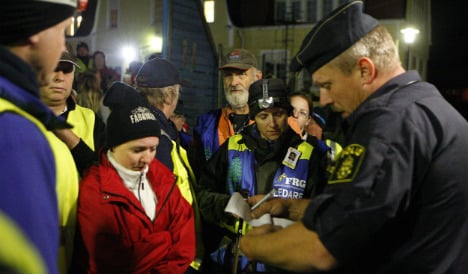 Photo: TT
"He was wet, cold and tired, but alive," said Stefan Dangardt at Dalarna police.
A massive search operation involving 1000 volunteers and a total of a hundred police were deployed to look after the boy, who disappeared from his grandparents home at 4pm on Friday, dressed in jeans and a sweater.
Despite the massive operation the boy remained on his home in the late autumn weather for over 17 hours until he was found late Saturday just a kilometre from where he had disappeared.
The boy was found by a local resident out combing the area on his motorbike.
The temperature in the area was around five degrees during the night and the boy was described as "very cold" when he was found.
The boy was rushed to hospital in an ambulance for examination. It has been confirmed that the boy was conscious when he was found.
Police have confirmed that no crime is suspected and that the boy left his grandparents home through a door which had been left open.