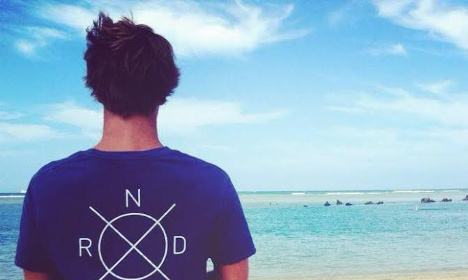 John Brodie's back. Photo: Private
Like many other expats in Sweden, Brodie came to Sweden for the love of a Swede – a woman he'd been with for three years. But just weeks after he moved to Stockholm in March, the tide took an unexpected change.
"We kinda split up. We parted ways," he tells The Local.
"I hopped on a train to Gothenburg with a small duffel bag, a good pair of shoes, and nothing to lose."
There, he found a job the very next day after contacting an interior design company.
Photo: John Brodie
"I got that job through Instagram actually," he says with a laugh. "One of the guys there was an artist from the US, I ended up shooting him an email, and blah blah blah – they brought me on board."
Brodie's carefree and laidback approach resulted in another life-changing career move this month. He was set to start a job as an international account manager of a Stockholm company, but he smelled adventure through his surf blogging.
"My writing really took off in the past two weeks. It's been an overnight success, it was really unexpected," he explains. "So I decided to pursue that instead. I called my boss and told him I wouldn't come in on Monday."
The writing began after Brodie pretended to be a journalist to get on a Stockholm winter surf trip. He saved the story until the summer, and it was published on various sites around the world.
Keen readers flocked to his blog, and soon offers came in to travel the world and write about surfing.
Photo: John Brodie
The 25-year-old was most recently offered sponsorship by the Scandinavian arm of Reef, a US surfing outfit, and has plans to visit Maine in the US and Cornwall in the UK soon.
As for his approach to the Swedes, Brodie doesn't offer advice, but admits he's taken an unusual approach.
"Everything I've done here has been backwards, against the grain. Sweden has a very structured culture, but where I grew up in Silicon Valley, when Facebook, Google and Yahoo were starting to go crazy – there, you take your own path until people say 'What the hell are you doing?'," he says.
And those with standard Swedish structured careers are still getting their heads around his waif-like life.
"I think it's a big culture clash. My Swedish friends don't understand me, but when I choose something, I always give it 100 percent. And whenever I think of settling down I get that urge inside of me again that wants to explore."
Photo: John Brodie