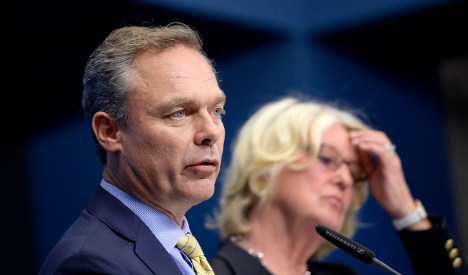 Liberal party leader Jan Björklund. Photo: Jessica Gow/TT
The move comes after Social Democrat leader Stefan Löfven closed the door on forming a government with the Left Party on Monday and said he may seek cooperation with centre-right parties instead.
But after a morning of discussions with the Liberal Party (Folkpartiet), the plan seems unlikely to come to fruition.
"The red-greens have won the election. Now it's their responsibility to form a government, and the Liberal Party will be in opposition," said Liberal leader Jan Björklund, according to reports from the TT news agency.
The fact that Jonas Sjöstedt and the Left Party have been shut out changed nothing, he added.
"They're still going to need the Left Party's support in parliament. Jonas Sjöstedt's influence may become even bigger."
Mattias Goldmann, the CEO of the green and liberal think tank Fores, predicts the red-greens will get "a strict no" from Annie Lööf, the leader of the Centre Party.
"Annie Lööf is essentially the opposition leader now, and I don't see her wanting to leave that position," he told The Local, pointing out that aside from the Reinfeldt-less Moderates, the Centre Party is the biggest in the Alliance.
Goldmann said there had been a lot of discussion about who might succeed Jan Björklund, the leader of the Liberal Party (Folkpartiet).
"He has said that he plans to hang around as leader, and I can see why he doesn't want to quit – but he's recorded the second worst result in the history of the party."
Elsewhere, Goldmann believes the Christian Democrats are too small a party to warrant the attention of the Social Democrats.

Centre Party leader Annie Lööf. Photo: TT
"And anyway, there's limited room for agreements between them; the Social Democrats can count on the support elsewhere instead."
Goldmann summarized that the most likely scenario was a smaller minority government of the Social Democrats and the Green Party (Miljöpartiet), backed in parliament by "passive support" from the Left Party and most of the Alliance.
He added that the budget in December will be a tougher ask unless the Alliance coalition – now in opposition for the first time – has disintegrated by then, which is what Löfven hopes for.
All that is known at this point about Sweden's new government is that it will be made up of the Social Democrats, which took in 31.2 percent of the votes on Sunday, and the Green Party (Miljöpartiet), which earned 6.8 percent.
Löfven was faced with immediate headaches in trying to form a government, especially one made significantly weaker by the Sweden Democrats, who earned 12.9 percent of the votes.
The Social Democrats' post election strategy came under fire from Markus Uvell, president of libertarian Stockholm-based think tank Timbro.
"I think the whole discussions with Centre Party and the Liberals is probably a huge waste of time," he argued.
He added that Löfven only has two options.
"He can rely on the Left Party to actually support him even though he's done everything possible to humiliate [Left Party leader] Jonas Sjöstedt," he said. Left Party leader Jonas Sjöstedt. Photo: TT
"Or he'll have to base some kind of government on the fact that he'll need new coalition partners for more or less every issue."
And when it comes to the budget, Uvell says without the Left Party supporting Löfven, the Alliance will get their own budget through.
"The Alliance is bigger than the Social Democrats and the Greens put together. If the Alliance gets the budget through, it would more or less trigger a re-election," he said.
"You can't have a government based on a budget completely different to what was promised during the elections."