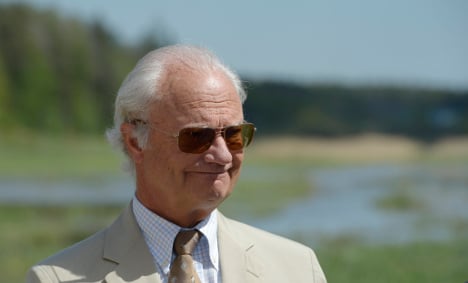 The King of Sweden. Photo: TT

The King was on his way to Bromma airport in Stockholm when his car was hit by another vehicle on Nockeby Bridge.

Although King Carl XVI Gustaf is known to enjoy driving, his press spokeswoman said that he was in the back seat at the time.

"There was a lot of damage to the car, but the King was unhurt. He is fine and he is not in shock," Margareta Thorgren told The Local.

She said the King had continued his journey to the airport in the security car that was following his vehicle at the time of the accident. the King has now flown to Västerbotten in northern Sweden, where he is on an official visit meeting local businesses and attending the opening of a new dairy.

Sweden is one of world's safest countries to drive in – according to traffic accident statistics – but the country's royal family have had some notable mishaps on the road.

A district known as "The Kings Bend" (Kungens Kurva), southwest of the capital — home to the world's largest Ikea store — was named after the current monarch's grandfather, Gustaf V, whose car wound up in a ditch there in 1946 when his driver took the turn too fast.

The King's Roundabout in the southern town of Norrköping, was named after Carl Gustav XVI who collided with another car there in 2005 when driving his BMW.