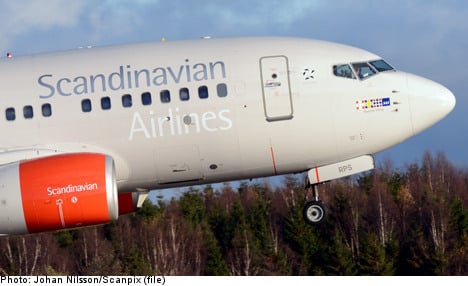 Scandinavian neighbours Norway will also experience a saving to the tune of 0.3 percent. The two countries are the only ones in the study where cheaper tickets were forecast for 2015.

By contrast, fares will rise by 2.5 percent in Germany and 1 percent in the UK. Global air fares are anticipated to rise by 2.2 percent says the report.

"In our region we have players like Norwegian who are very active and that has driven prices down. That's been met by our traditional airlines, especially SAS, with some competition for prices," Johan Wilson, managing director of CWT in Sweden.

For western Europe flights are expected to go up by 1 percent with eastern Europe fares to go up by 0.8 percent. Flights originating in the Middle East and Africa will increase by 1.9 percent.

"For large airports like Frankfurt, London and Paris it is very much intercontinental flights and there the price competition isn't so big," added Wilson.

In June Norwegian Airlines announced they were to sell low-cost flights between London and the US. The CWT report stated the 1 percent increase in Britain was due to the competition between budget carriers.

A spokesperson for SAS declined to say whether the airline was planning price reductions for next year.

"There has been tough price pressure in the market and we feel it is still in Scandinavia. It depends on the over capacity which all airlines observe," Henrik Edström told the TT news agency.

The report also stated that hotel prices will increase in Sweden by 0.5 percent and globally by 3.6 percent.