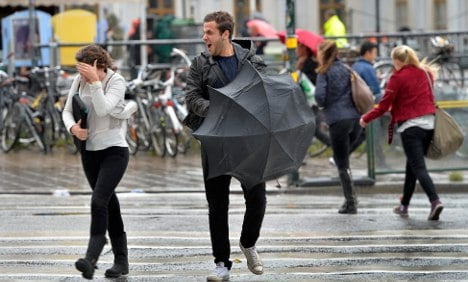 Strong winds are battering Stockholm and the east coast of Sweden. Photo: TT

Vattenfall is among the worst affected areas, with 6400 people coping without power. 3000 homes around Uppsala are affected.

There is no hot water in Gälve according to local newspaper Gälve Dagblad.

"We do not know if it's the weather or something else behind it," Björn Tusås, Head of Marketing and Communications at Gävle Energy, told the paper.

Ferry services between Oskarshamn and Visby have been disrupted.

Heavy rain is expected again across Östergötland and Södermanland on Tuesday, according to the Swedish Meteorological and Hydrological Institute (SMHI). It has predicted up to 50 milimetres could fall in the next 24 hours.

A gale warning has also been issued around the islands of Öland and Gotland.