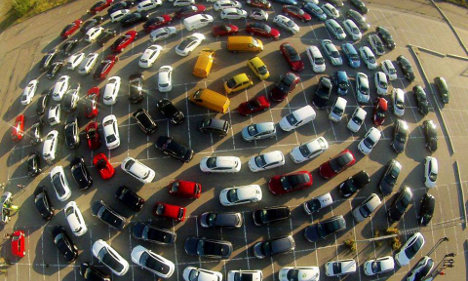 Electric car owners from across Scandinavia came together on Sunday to campaign for greener transportation in the region.
As part of an event showcasing Copenhagen as the 2014 European Green Capital, organisers reported that 166 electric vehicles crossed the Öresund Bridge between Malmö and Copenhagen.
The previous record for the longest electric car parade was set in Japan in 2010 with 100 participants.
Although they are still awaiting an official count, the people behind the event also believe they have easily secured the Guinness World Record for the ‘most electric cars on a roof top parking lot’ and the ‘largest spiral made with electric cars’.

Cars get in to position. Photo: Jens Astrup/Scanpix
The organisers of Sunday’s event said that it was a fun way of bringing attention to the idea of a ‘green motorway’ connecting the Öresund Region with Hamburg in Germany.
“We need to get people to pay attention to the electric car because it is non-polluting and quiet. Before summer there just 400 registered electric cars out of the 160,000 registered vehicles in Copenhagen, or about 0.25 percent. That is way too few,” Jakob Hougaard, the deputy chairman of the City of Copenhagen’s technical and environment committee, said.
Read more about the event on The Local Denmark