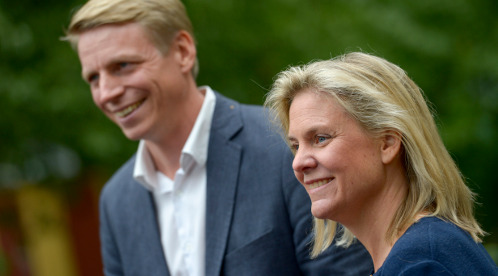 Stefan Löfven, the man tasked with forming Sweden's next government following elections on 14 September, is hoping to form a Red-Green coalition with Sweden's Green Party.

The two parties have been discussing a future budget that they hope to push through parliament later this autumn.

Löfven is due to present his plans to Parliament's speaker Per Westerberg at the end of the week.

On Monday his party's economic spokesperson Magdalena Andersson met with her Green party counterpart, Per Bo at a conference on Långholmen in Stockholm.

"We are facing many challenges to do with declining educational attainment, high unemployment and major environmental hurdles", Per Bo told reporters.

"We are discussing issues together because we'll sit in government together", added Magdalena Andersson.

The two sides declined to go into detail about their talks.

Stefan Löfven is due to meet Parliament's Speaker on Friday. Photo: TT

On Sunday the Green Party suggested that it would be prepared to talk about sensitive defense topics with the Social Democrats. The Greens have previously argued strongly against increasing spending on Sweden's military. But the party's secretary indicated otherwise in an interview with debate programme Agenda on Swedish television on Sunday night.

The Greens' openness to debate the issue follows the revellation last week that Russian planes have been flying over Swedish airspace, as the crisis in Ukraine continues.

The Social Democrat party campaigned to increase investment in Sweden's military during its election campaign.

Sweden elections: who's who in politics?

None of the centre-right groups have agreed to be part of a Social Democrat-led coalition, but they have said that they are keen to collaborate with a Red-Green government on individual issues.

In return, the Social Democrat leader has suggested that he will stick to the previous government's commitments on defense, migration and free schools.

Meanwhile speculation continues over who Stefan Löfven is likely to choose for his cabinet, with bookmakers predicting former EU commissioner Margot Wallström could take over as foreign minister.