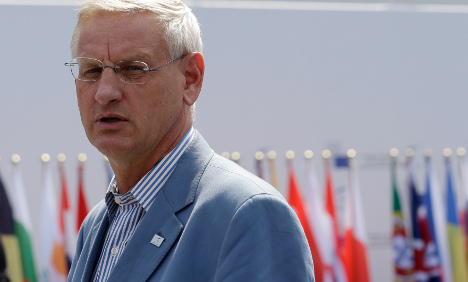 Sweden's outgoing Foreign Minister Carl Bildt. Photo: TT
"Let us briefly look up from all the post-election analysis and the debates surrounding forming Sweden's next government and directing our focus outwards. What is Sweden's role in the world today and how we want it to be in the future?
Carl Bildt's years as Sweden's Foreign Minister were filled with backtracking, scandals and appeasement and the country missed many opportunities to be a key player on the world stage.
Historically, we have much to be proud of. Sweden has been a strong voice for justice, solidarity and human rights. For me, this picture has changed over time with Carl Bildt as Foreign Minister. I have followed Bildt since my time as President of the Social Democrat Youth League and now as a Member of the European Parliament.
There have been many missed opportunities. For example the much-discussed visit to Iran. Carl Bildt was one of the foreign ministers who were invited to talk with the Iranian regime, including about its nuclear programme. This was also a good opportunity to clearly state our disgust against political prisoners executed in Iran and how this has intensified under the new country's President. We didn't do this.
The Reinfeldt government also had an opportunity when Barack Obama visited Sweden last year. There was a tremendous chance to raise the issue of disarmament and to express concern over America's increased use of drones in the fight against terrorism. These drones kill more civilians than the United States wants to make out. When the United States legitimizes the use of drones, there is a risk that they will become more common. But this wasn't a key issue for Fredrik Reinfeldt's team and the visit passed without making an impact on world affairs.
Carl Bildt has served on the Board of Lundin Petroleum and owned shares in Vostok Nafta, a major shareholder of Russian gas giant Gazprom. He is currently under fire for his business in Georgia – it is claimed that while working for PR company Kreab he received 18 million kronor from them to promote the country in the media. Whether or not the claims being made against him are true, we can conclude that it has been problematic to have a foreign minister with such strong and controversial interests.
A small nation like Sweden must have a clear foreign policy in order to influence the world and take it in a better direction. It is not enough that Carl Bildt writes opinion pieces or tweets about how the world looks. There are political commentators aplenty. Our next foreign minister needs to be a politician first.
It's time for Sweden to have a key place in the world again. Although we are a small country, we know from experience that we can be a strong voice that influences the world. We should focus on jobs, human rights, disarmament and international development to inform our foreign policy going forward.
It's time for a new foreign policy, a forward-looking policy that recaptures Sweden's reputation to stand up for the vulnerable. A foreign policy we can be proud of." This is a translated and abridged version of MEP Jytte Gutland's editorial, originally published in Swedish by SVT.