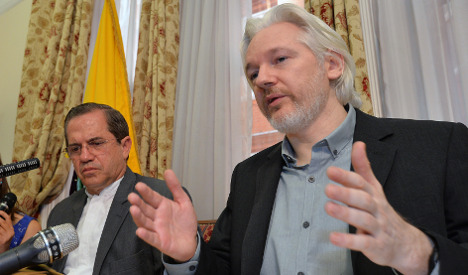 Julian Assange is currently living inside the Ecuadorian Embassy in London. Photo: TT

It was the first time that Swedish prosecutors, who want to question the 43-year-old Australian on allegations of rape and sexual molestation, have commented on the likelihood that he could be sent to the United States.

Assange refuses to return to Sweden and has been holed up since 2012 in London in the embassy of Ecuador, which granted him political asylum the same year.

The United States has not yet requested extradition of Assange since Sweden issued a European arrest warrant in November 2010, rendering the whole question hypothetical, the prosecutors said.

"It would seem to be a far-fetched idea that the United States would have waited since 2010 to initiate extradition proceedings with the intention of sending their request to Sweden rather than to Britain," they said.

"Even considering that this would be permitted under Swedish law, a decision to extradite him to the United States from Sweden would also require the agreement of Britain." Swedish prosecutors made their statement in a written reply to arguments made by Assange's lawyers, who have appealed a decision by a Swedish court in July this year to

uphold the arrest warrant against him.

'Assange to stay put until US guarantee'

The Court of Appeal in Stockholm is expected to announce its decision within the next week.

If it scraps the European arrest warrant against Assange, it could mean that he would be able to leave the Ecuadoran embassy.

The arrest warrant was issued to enable Swedish prosecutors to question Assange about charges brought against him by two women in their 30s. Assange denies the accusations.

Assange has called on the prosecutors to travel to London to question him or, alternatively, to do so by video link, but they rejected both ideas again on Tuesday.

In 2010, Wikileaks began publishing 250,000 American diplomatic cables and 500,000 classified military reports, covering both American diplomacy and the US wars in Iraq and Afghanistan.