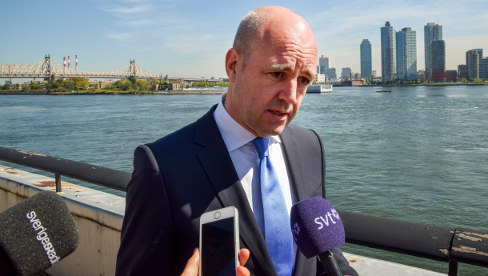 He made the comments from a UN climate summit, which he is attending alongside Foreign Affairs Carl Bildt and Minister for the Environment Lena Ek.

Reinfeldt announced on Sunday 14 September that he would resign both as Prime Minister and as leader of the Moderates.

But announcement was met with disappointment from many within his party. Some members have openly criticised him for making a speedy exit during a complex political period.

Commenting on the criticism, he told reporters in the US that he had resigned due to the success of the opposition Social Democrats and Green Party, which look set to form a coalition government.

However, Sweden's future parliament will be deeply divided and the success of the anti-immigration Sweden Democrats who are now the third largest party in Sweden could make it difficult for a Red-Green coalition to push its policies through.

Meanwhile Social Democrat leader Stefan Löfven has suggested that he will co-operate with the parties that made up Fredrik Reinfeldt's Alliance on certain policies.

Challenged on why he didn't feel a sense of responsibility to stick around during an uncertain political period for Sweden he told Swedish television that there were "others who can handle negotiations for the Moderates."

"Sometimes you have to be able to change the party leader so that there is a long-term perspective," he told SVT.

He said it was "logical to say thank you and prepare the ground for a successor".

Meanwhile Moderate Party members are busy debating who could become their next leader.