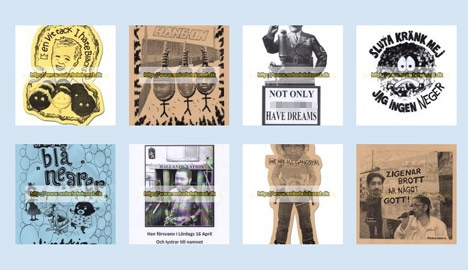 A Danish site is selling the works that the Swedish state wants destroyed. Screenshot: www.entartetekunst.dk
Last week, Danish radio station Radio24syv dropped plans to display 31 works by Park, who is in prison in Sweden after he was charged with inciting racism and defamation through his artwork.
But on Wednesday the Danish Free Press Society (Trykkefrihedsselskabet), announced it was working on finding a Copenhagen gallery that was willing to display the pictures within a week.
“It was a very important case that Radio24syv brought up and it is all too important to drop now. Dan Park is still in jail and there are still only a few people who are able to see the art that put him behind bars. We want to change that,” said the Free Press Society’s Chairperson Katrine Winkel Holm.
Park’s works include an image that depicts three Swedish residents with African backgrounds portrayed with nooses around their necks, a Catholic bishop receiving fellatio from a young boy and Jesus having sex with Muhammad.
In August a court in Malmö in southern Sweden ordered that nine of his pictures should be destroyed.
Read the full story on The Local Denmark
The Free Press Society has now set up a website to sell the nine disputed artworks, under the banner ‘Sweden’s most dangerous pictures – buy them here’.
"When it comes to Sweden’s rulers, little surprises us. They are the ones who – with open eyes – are shoving the old peaceful, democratic and affluent Sweden into the abyss. We will not put up with the authorities’ Gestapo-like behaviour. So The Free Speech Library has reprinted the pictures confiscated by the authorities and now you have the opportunity to buy them,” the group wrote online.
Profits from the sale will be used "to strengthen the defence of free speech," according to the post.