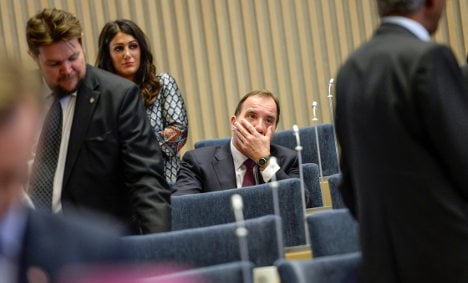 Social Democrat leader Stefan Löfven. Photo: TT
Two years ago the centre-right Alliance halved value-added taxes (VAT) in restaurants and cafes across the country, a move that was supported by the Green Party (Miljöpartiet). The former government said the idea would boost employment among young people.
The policy has been often criticized by Stefan Löfven and the Social Democrats, who pledged to increase the tax again if they won the election. Löfven and his finance spokeswoman Magdalena Andersson said they would use the estimated five billion kronor ($695 million) to boost education funding.
However, Löfven did a U-turn on Thursday and agreed with the Greens that the taxes should remain at the current rate, the Social Democrats confirmed to The Local on Thursday. Upcoming Finance Minister Magdalena Andersson. Photo: TT
What's next on Sweden's political stage?
The move raises large question marks over the gaping hole in the Social Democrats' budget plans, reported the TT news agency.
Throughout Löfven's election campaign, he insisted that the tax was an inefficient use of money that could have created, for example, 10,000 teaching positions.
Löfven and Andersson often brought up the topic in debates, saying that while cheaper restaurant bills were creating jobs in the restaurant branch, the money could employ four times as many jobs within education or healthcare.
Andersson told the TT news agency that issues like this were inescapable without a majority government.
She stood by her previous comments about the taxes.
"Absolutely, we believe this money could be used more effectively," she said.
"We wish we could have used the money for something else. Now we'll have to take a look when the budget is finished and see how it all adds up."
The Alliance heads are yet to publicly comment on the revelations.