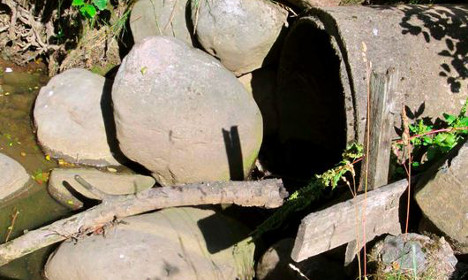 The location of the hidden weapon. Photo: Polisen
The pupils were out power walking in woods when they spotted the gun.
"At first we thought it was a guitar, but when we opened the case we realized it was a weapon," 16-year-old Behare Shala told the Aftonbladet newspaper.
She added that she knew it was an AK47.
"I recognized it because I play a lot of computer games with my brother," she said.
The package was found back in May, but local police have only just reported the news.

The seized weapon. Photo: Polisen.
Police were able to connect the rifle to a 58-year-old man who was a convicted axe murderer, after they found a map in his house marking the spot where the gun was found.
Following the discovery, the man was sentenced to 20 months in prison.
Detectives were quick to praise the trio of teens, and invited them to the station for a Swedish fika (coffee and cakes).