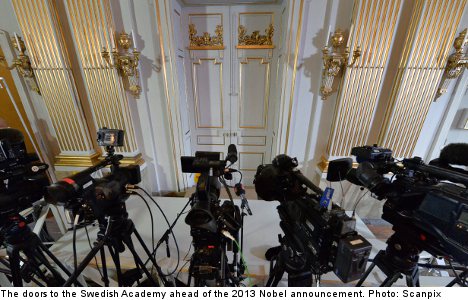 That's what happened in 2011 when the Nobel committee announced that half the prize for medicine and physiology would go to Canadian-born biologist Ralph Steinman.

It soon emerged that Steinman had died three days earlier, but the Nobel committee made an exception to its own rule that the prize cannot be awarded posthumously, arguing that it thought he was alive when it made the decision.

"If we keep going on like this, there will be many more cases of this kind. It's just a matter of time. So something has to be done," said Santo Fortunato, a physicist at Finland's Aalto University.

Earlier this year, Fortunato and several other scientists wrote an article in the prestigious magazine Nature that documented how the wait was growing longer.

"Before 1940, Nobels were awarded more than 20 years after the original discovery for only about 11 percent of physics, 15 percent of chemistry and 24 percent of physiology or medicine prizes," they wrote.

"Since 1985, however, such lengthy delays have featured in 60 percent, 52 percent and 45 percent of these awards, respectively."

If the trend continues, they wrote, by the end of this century, the prizewinners' predicted average age for receiving the award is likely to exceed their projected life expectancy.

In other words, most might be dead by the time they are in line for getting a Nobel prize.

"This lag threatens to undermine science's most venerable institution," they concluded in the Nature article.

The criticism comes as the 2014 Nobel prizes in the sciences are set to be announced this week.

Proponents of the current Nobel arrangement say that it is in the nature of modern complex science for a discovery to be confirmed as bona fide only after lengthy testing.

The Higgs boson, for instance, whose discovery was honoured with the physics prize last year, was hypothesised almost half a century ago.

But the elusive subatomic particle, which gives other particles mass, was only finally proved in recent years with the help of massive and costly practical research.

By then, one of the three original discoverers of the Higgs boson, the US-Belgian physicist Robert Brout, had died.

But for Sven Lidin, the chairman of the Nobel Committee for Chemistry, the Higgs boson is a good illustration of why it's almost impossible to push the process any quicker.

"We want to make sure that we award those who open the first door into new scientific insight. This means that naturally there is a delay," he said.

"Typically it takes about 20 years before the initial door opener has matured into a Nobel prize."

And it guards against rushing to award breakthroughs that could later turn out to be less than meets the eye.

In 1989 two scientists announced the discovery of a technique for "cold fusion", which would allow nuclear reactions at near room temperature, and, if proven, would solve most of the world's energy problems permanently. A quarter century later, it remains unconfirmed.

"Every year there are lots of claims of amazing discoveries, and quite a few of them turn out to be not quite as amazing as everyone thought," said Lidin.

"Because of that, it's a good idea to exercise some caution before bringing out the pom-poms and calling out for the cheerleaders."

As for ageing scientists missing out on receiving an award they deserve, Aalto University's Fortunato has a suggestion.

"We could consider awarding it posthumously. Of course, the people who receive it won't have much to gain because they will be dead, but I think it's important that their discoveries get recognised," he said.

However, a posthumous prize would mean missing out on the Nobel awards' ability to put science on the public agenda, according to Lidin.

Even if the Nobel prize continues to go only to living scientists, as has been the rule since 1974, the growing time lag means that it will increasingly go to scientists at the end of their careers.

To provide younger scientists with proper incentives, alternative awards are needed, argued Matthew Wallace, a science policy researcher at the Institute for Innovation and Knowledge Management of the Spanish National Research Council.

"In order to promote and reward innovation and creativity, it would indeed be more useful to have prizes that reward more junior researchers and that reward more recent discoveries," he said.