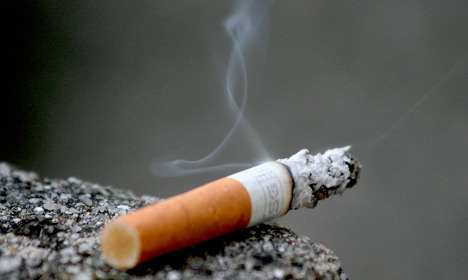 An outdoor smoking ban is being considered in Sweden. Photo: Raul Lieberworth/Flickr
In an effort to reduce passive smoking in Sweden, the agency (Folkhälsomyndigheten) has proposed a serious cut to the number of public places Swedes can smoke.
"It's about time to make public places free of cigarette smoke," agency head Johan Carlson said in a statement.
"Many people are uncomfortable with cigarette smoke and it can even trigger breathing difficulties for asthmatics."
He added that such a ban might even make it less attractive to smokers to pick up a cigarette at all elsewhere.
"If fewer people smoke then the public health will be improved immensely," he added.
The banned areas would include bus stops, playgrounds, outdoor serving areas and entries to public buildings like hospitals.
Sweden's Public Health Agency noted that passive smoking is responsible for up to ten cases of lung cancer in the country each year and around 400 cases of cardiovascular disease.
It also found that half of Sweden's adult population is exposed to passive smoking outside at least once a month, and that two in five children with asthma have suffered from interaction with cigarette smoke some time in the last three months.
Your views: Should outdoor smoking be banned in Sweden?
Reacting to the proposal, 18-year-old Stockholm student Clara Bierbum told The Local:
“I think it’s really good. People who don’t want smoke in their face shouldn’t have to have that. I might as well move. I don’t have to stand by a bus stop, I can stand a bit further away.” Smoker Clara Bierbum backs the plans. Photo: The Local
But Peter Pedersen, 44, who is a non-smoker said:

“The first ban was successful; this might be taking it too far. What if the playgrounds are privately owned, would a ban even be legally possible? What’s the purpose of the ban? To shield children and non-smokers or to get rid of a certain behaviour – a 'monkey see, monkey do' kind of thing. I don’t think it’s a good proposition.”

The Public Health Agency's suggestions are being handed over to Sweden's government for consideration on Wednesday.
Lung cancer groups made headlines last year after proposing that Sweden should have a total smoking ban by 2025.
Do you agree with the proposal? Post your comments below or tweet us @TheLocalSweden