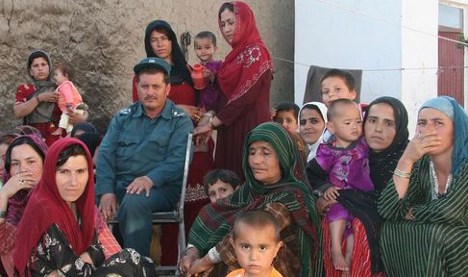 No Burqas Behind Bars is set in Thakar prison. Photo: Nima Sarvestani
The movie No Burqas Behind Bars (also released as Freedom Behind Bars in some countries) was directed and produced by Swedish film makers Nima Sarvestani and Maryam Ebrahimis.
The documentary features 40 women and 34 children who are living in just four cells in Thakar prison.
It was first broadcast on Swedish television network SVT last year and has since been shown in cinemas around the world.
The title refers to the fact that women are usually required to wear burqas from head to toe outside the home, but these garments are not required in prison. The film's director Nima Sarvestani sought to 'unmask' them further by asking detailed questions about their experiences.
"It is really good for this film to get recognized," he told The Local after hearing of the Emmy nomination.
"Not just for me but because of the message of the film. For the Afghan women it is very important that their story is heard. People need to understand how women in Afghanistan are living and what they need."
The women in the documentary are serving long sentences for 'crimes' including marrying lovers their family disapproved of or running away from abusive husbands. The movie has been praised for capturing the prisoners' desperation as well as their strength.
One of the characters, Sara, has since moved to Sweden with the help of the film's production team, after she was threatened by her family following her release from jail.
No Burqas Behind Bars has already been well received by international critics, winning prizes including the Best International Documentary award at the New York Independent International Film Festival and at the Rome Independent Film Festival earlier this year.
The movie has also been nominated for the Best TV Documentary Award at the Prix Europa Festival in Berlin, which is Europe's largest festival for TV, radio and online media and kicks off on October 18th in Berlin.
The International Emmy Award ceremony takes place on November 24th in New York.
Other nominees in the International Documentary category at the Emmys are Brazilian film The Volta, British documentary No Fire Zone and South Korean movie Phantoms of the Border.