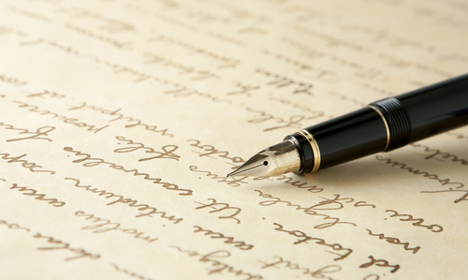 Photo: Shutterstock
"Yo sister! This letter was written 20 years ago. Amazing, huh? Today you're 38 – I wonder what you're up to these days."
So begins a letter from the brother of Johanna Olsson, a note that was penned in 1994 at a time when Sweden's Postal Service allowed people to write letters to be sent in the future, reported the Dagens Nyheter newspaper.
The letter mentions a few of the events in 1994 that were of significance to both the siblings ("You're together with Aje, you were in the US and missed home") and it ends with "A big hug to my dearest sister".
Around 20,000 Swedes took up the offer from the Postal Service and most of them sent letters to themselves, but Johanna Olsson's brother Fredrik decided otherwise.
Last week, Olsson finally received the letter.
"It was a bit of a shock. It was lovely to get it, but I choked up a little. It was a melancholic feeling," she told the paper.
Olsson explained that she was aware that the letter might come through, as some of her deceased brother's friends had mentioned getting similar letters recently.
The Swede took a picture of the letter and shared it on Facebook, prompting a flurry of reactions from her friends and family.