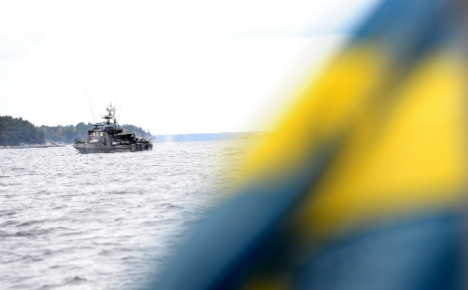 A military patrol in the Stockholm archipelago during the ongoing submarine hunt on Saturday. Photo: Pontus Lundahl/TT

"Russian Navy ships and submarines are fulfilling their duties in the world ocean waters in accordance with the plan," a spokesperson for the Russian defence ministry told the Russian Interfax news agency.

The spokesperson added: "There has been and there are no extraordinary, let alone emergency, situations involving Russian warships."

Sweden intercepted further communications after it began its military operation in the waters off Stockholm, as encrypted messages were relayed between transmitters in the Stockholm archipelago and the Russian enclave Kaliningrad, SvD said.

The Swedish military said it could neither confirm nor deny the report.

Since the news broke on Friday evening the Swedish defence forces have carried out a major hunt, involving more than 200 people, for "foreign underwater activity". Several Swedish media outlets have reported that a Russian oil tanker, close to the Stockholm archipelago, has since turned around and left the area at a speed of 12 knots.

On Saturday the press officer for the Swedish military told the TT news agency that the large operation would continue until they were done. He stated that the information the military had received came from "trustworthy sources."

Following the reports in Svenska Dagbladet the military have yet to comment further.

"We have no further comment beyond what we said yesterday," Mattias Robertsson, public relations officer, for the Armed Forces said on Sunday.

The operation is continuing throughout Sunday with the military deploying helicopters, ships and armed forces to comb the area.

News of the "foreign underwater activity" has sparked fears of renewed Russian submarine activity which peaked during the Cold War. In an infamous incident in 1981 a Soviet sub ran aground in a secret Swedish submarine lane, sparking a diplomatic crisis.

Military historian and author Lars Gyllenhaal told TT that the armed forces will likely lean on veterans of the Cold War era to deal with the current situation.

"I'm fairly sure that much is improvised although it could be the case that the armed forces have acted in incidents which haven't been made public. The armed forces are not out of practice and I think they will call in older officers who have experience from the 1980s era," he said.