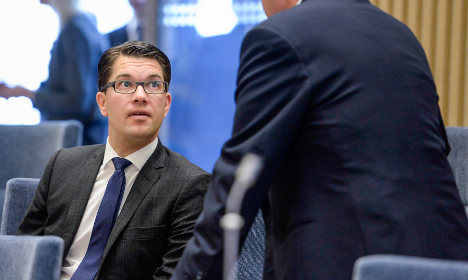 Sweden Democrat leader Jimmie Åkesson. Photo: TT
The European elections in May saw a surge in votes for nationalist parties across the continent, including Jimme Åkesson's Sweden Democrats.
Together with another six founding members, the Swedish party formed the Europe of Freedom and Direct Democracy (EFDD) – which including Ukip leader Nigel Farage.
But the EFDD disintegrated last week after a Latvian member pulled out, apparently ending the short-lived alliance between Europe's Eurosceptic parties.

Ukip leader Nigel Farage. Photo: TT
How the Sweden Democrats went mainstream
All groups in the European Parliament must have at least seven member parties, and on Monday the EFDD gained its seventh again through Polish MEP Janusz Korwin-Mikke, wrote The Guardian newspaper.
Referring to Korwin-Mikke as a "far-right, racist Holocaust-denier", the paper reported that the Polish politician had come under fire for calling for the vote to be taken away from women, and for saying that "four million niggers" had lost their jobs thanks to the United States' policy on minimum wages under John F Kennedy.
The deal is not yet confirmed by the European Parliament.
As The Local reported in June, Ukip leader Nigel Farage's decision to admit the Sweden Democrats (SD) into its European parliament group helped to give the party with fascist roots greater credibility and acceptance.
"For SD it is another step in the process of institutionalizing themselves and becoming a member of an established EU-critical group," Ann-Cathrine Jungar, a political scientist at Stockholm's Södertörn University, told The Local at the time. Åkesson reported that he felt burned out after the election campaign. Photo: TT
Jimmie Åkesson's party won 9.7 percent of the vote in the European elections and the Sweden Democrats have two seats in the European Parliament.
Åkesson himself has recently checked out of politics for an undetermined period of time citing exhaustion.
"Now the election is over and things have settled a bit, I've noticed that things don't feel as right as they should after a success like this," he explained in an open letter.