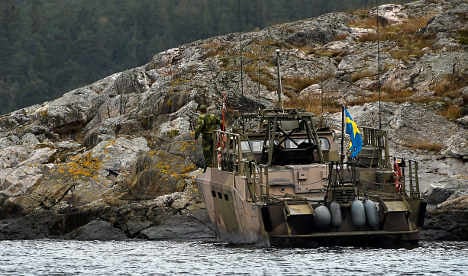 Photo: TT
Speaking at a press conference on Tuesday, Supreme Commander General Sverker Göranson said that the most important goal of the operation was to "send a very clear signal that Sweden and its armed forces are acting and are ready to act when we think this kind of activity is violating our borders."
"Our aim now is to force whatever it is up to the surface… with armed force, if necessary," he added.
He added that submarines are "extremely difficult" to find, and that Sweden has never succeeded in the past when it came to tracking them down.
"And no one else has either," he added.
The Local meets people living in the search area
During more than a decade of hunting Russian U-boats in the 1980s and early nineties, Sweden never succeeded in capturing one, except in 1981 when the U137 ran aground several miles from one of Sweden's largest naval bases, triggering an embarrassing diplomatic stand-off for Russia.
Early on Tuesday afternoon, at least five naval ships were stationed for more than two hours in an area east of Ingarö, the closest reported point to the Swedish mainland since the operation began. DN reported that one of the ships had "made contact" with something, but General Göranson denied the claim.
Göranson's comments to the Swedish media came after a nearly two-hour long meeting with Sweden's defence committee behind closed doors.
They also followed reports in the Dagens Nyheter newspaper that there had been more than 100 reported sightings of a suspect vessel from members of the public in the past day or so.
"We're still getting more reports, and I want to underline the fact that we're happy about this," Göranson added.
"You mustn't forget that there's a great deal of work to be done with such a flood of reports. We have to analyze and confirm them all."

The military is five days into its search. Photo: TT
Sweden's military has now been out on the hunt for six days, with the operation moving "across the archipelago" on Tuesday.
Jesper Tengroth, press officer for the Swedish military, told The Local that the focus had switched from just the southern islands on Monday.
Full timeline of the hunt Photo: TT
Out in the Stockholm archipelago, The Local met Bosse Linden, a 54-year-old water taxi driver from Vaxholm who also served in the Swedish navy for 25 years.
"Things like this have happened before but I am not so scared. I think there is something out there, but the archipelago is really big," he said.
He believes that Russia could be "playing a game of hide and seek" or simply making use of the broad stretch of "special water" which he describes as a dream location for people who want to learn how to drive boats or navigate submarines.
"If you learn how to navigate a submarine here then you will be the best," he told The Local.
"I don’t think it is a war mission. I don't think someone is going to take over. But some people are scared," he added.
In another development, Sweden's Prime Minister Stefan Löfven said on Tuesday that his government planned to increase spending on defence.

"We agree on a broad basis between many parties in Sweden in the Swedish parliament that we need to increase our capacity, meaning that we need to put more resources into defence," he said on a visit to the Estonian capital Tallinn.