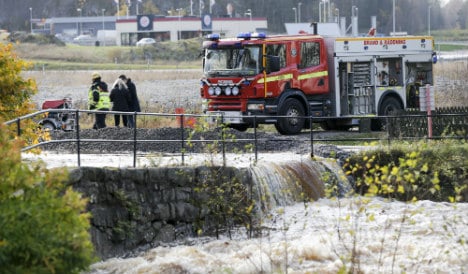 Photo: TT
Some 90 millimetres of rain has fallen in areas of the west coast of Sweden on Saturday and water levels are continuing to rise.
"This Is probably the worst we have experienced in many years," said Rolf Olausson at Strömstad emergency services.
Northern Bohuslän has suffered most from the heavy rainfall which pushed from the North Sea on Friday and Saturday night.
A number of buildings have been evacuated in the small town of Skee close to Strömstad.
"The people in their houses were completely surrounded by water and were unable to go anywhere. There is no point pumping out the water as it is filling up all the time," Olausson said.
The emergency services are also concerned about an old stone bridge over Vättlandsån in Skee which they fear may be swept away in the flood waters.
"The water is now gushing under, over and on the sides. If it would collapse then we would get an underwater levy and that would not be good at all," Olausson said.
Several roads in the area are completely closed and there have been reports of three incidents of drivers needing help to get out of their cars which had become stuck in the floods.
"In one case we had to deploy rescue divers when the water rose to over a metre. It's pretty extreme" said Kim Selland at the road authority in Gothenburg.
According to Selland the water is now starting to spread out along the E6 motorway.
"The water has nowhere to go. Levels are rising, reaching now the major roads that are usually located higher up from the ground. Soon there will not be a road that is not waterlogged. It is beginning almost to resemble Venice," he said.
Rail services have also been hit with a report that ten people had to be evacuated from a train which was forced to stop along the Munkedal-Stromstad route after an embankment became flooded.
The Swedish meteorological authority SMHI has maintained a class 2 warning for minor waterways in the area. Forecasts indicate that the peak will be reached at some point over the weekend.
According to Therese Fougman at SMHI, more rains could however fall during Sunday and Monday.
"But then it'll be small amounts, maybe five to ten millimetres."